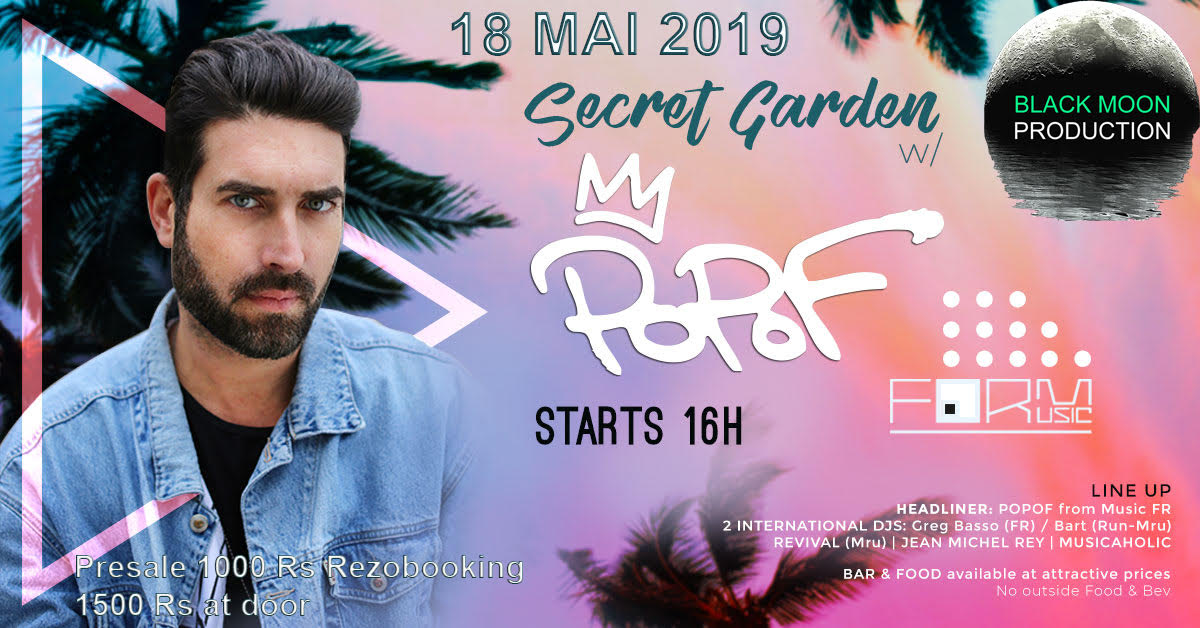 SPECIAL PLACE IN THE WEST COAST OF MAURITIUS

Parisian artist POPOF is one of the most widely recognized names within the world of Techno and House music.
One of the most downloaded artists in his category, POPOF is in very high demand for his remixes and has worked for famous artists such as Depeche Mode, Chemical Brothers, Moby, BookaShade, Vitalic, Tiga, Maetrik, Martin Solveig and many more.
POPOF has worked with some of the most respected labels within the scene, from early work on Turbo, Cr2 and Mistakes to the launch of his own label Form Music in 2009, Sven Väth’s infamous Cocoon outlet, Kerri Chandler’s Kaoz Theory, Jamie Jones’ Hot Creations, Nicole Moudaber’s Mood, Adam Beyer’s Truesoul, and more.
In 2015 POPOF released his LP ‘Love Somebody’. Its two first singles, “Words Gone” and “Going Back” were followed by a string of remixes by some of the industry’s biggest names: Jamie Jones, Luciano, Magda, Kerri Chandler, Eats Everything, Lee Foss, Marc Houle, Oxia & Miss Kittin… In June 2016 his third single from “Love Somebody”, “Lidl Girl”, featured remixes by the Carl Cox Collective, Kerri Chandler, Magda, Shaun Reeves & Tuccillo.
In 2017 POPOF embarked on a sold-out tour in South America, followed by a widely acclaimed performance at Glastonbury festival and remixes for both Cuartero, on Lee Foss’ label Repopulate Mars, and UMEK – whose “Shadow Tactics” EP was released on POPOF’s Form Music outlet. August 2017 also saw the successful release of an exclusive CD compilation by POPOF and Luca Donzelli for Amnesia Ibiza; an event followed by POPOF’s outstanding performance at BPM Festival Portugal.
2018 was yet another solid year for POPOF, with performances at Ultra Music Festival (Rio de Janeiro, Miami, Beijing, Seoul …), and a string of releases on Nicole Moudaber’s Mood records (“Confusion” EP), Adam Beyer’s Truesoul imprint (“Enforced” EP), Pig & Dan’s Elevate label (“Mind Accees” EP), and on his own label Form Music (“Bowo” EP).
In 2019 POPOF’s first release of the year was on Kaluki Musik with his “Chronic” EP. Many more releases are to be expected, including an EP in June on Jamie Jones’ Hottrax imprint.

GREG BASSO (FR)
Greg Basso is a versatile artist who explores various genres of music.
Today,he stresses his preference towards melodic techno, tech house, and afrohouse
he likes to heat the dancefloor with a sexy groovy music , tribal vocals and a latin vibe due to his Mediterranean blood

Born in 1974 in Dijon (France), he start to play as he was child in children party, it was always him who drives the music for…At this date, he was making special K7 with special selections and without any blank… After was the vinyl passion…was fond of hip hop and different varieties music…
And arriving in the end of 80’s the acid house and the 1st house music, was the first revelation for him…after arriving the 1st tekno music called “trax” (a mix between trance music, commercial and techno)…
In the beginning of the 90’s a famous electroclub is opening in his country…this club called “l’AN FER” one of the first club in France to play electronic music and and welcoming all the artists of the planet…
He adopted this club, starting coming in vip, after going into the cabin with the famous dj’s and there discovering his new passion…
Laurent Garnier done his beginning in this club…was playing every Friday’s per month and after creating “the wake up” partys every 1st Friday/month was a real consecration for Dj Bart…
So here became Dj Bart… Start playing with the first disciple of Laurent Garnier who’s calling Dj Tonio from F-COM the first electronic label from France…
After is meeting other Dj like Carl Cox, Jeff Mills, Carl Craig, Adam Beyer…
He inspired of them music to grow and becoming who he is…
Now he wants to explore other horizon, his music is enjoying many French people so why not the other’s…
Being since 1997 on Reunion Island and organising many party here, booking and playing with many Dj’s like Laurent Garnier, Dj Tonio, Manu Le Malin, Torgull, Agoria, Monika Kruse, Laura Palmer, Kiko, Rikkks, Paul Kalkbrenner, Simina Grigoriu, Julian Jeweil, Jack de Marseilles, OXIA …
Is touring in France, Réunion, Mauritius, Seychelles, Madagascar, South Africa, Switzerland, Span, England, Germany, Mexico, USA …

REVIVAL – MU
All started since 2001. . . Ashley & Yash started their musical path with the influence of local and international artists such as Bernard Desmarais, Dousk, Hernan Cataneo, John Digweed, Sandy Rivera, Sasha to mention a few.
They developed their passion by starting to spin records in parties with knowledge acquired by Pascal Pierre, Dj Beat and a lot of self learning.
They had the privilege to feature among exceptional line ups including DJs among which are; Hernan Cataneo, Guy J, Egbert, Enrico Sangiuliano, Ante Perry and SQL, Boris Brejcha, Ann Clue, Denis Bul, Stephan Bodzin, Darin Epsilon and more.
REVIVAL combines progression, flow, harmonics & groove to create the perfect trip for your ear, heart and mind.
A duo that you surely don’t wanna miss out.

Come with your best Smile

5) This ticket is a revocable license and the Management of BLACK MOON Production LTD reserves the right, without the refund of any portion of the ticket purchase price, to refuse admission or to eject any person who fails to comply with the rules of the venue and applicable laws.

10) This ticket may not be used for advertising, promotion or other trade purposes without the express written consent of BLACK MOON Production LTD.

11) The ticket user consents to use of his/her image or likeness incidental to any video display, transmission or recording of the event by BLACK MOON Production LTD, the venue or the artist.

12) The use of cameras, video or audio recording equipment is prohibited unless otherwise indicated by PURE Management Ltd, the venue or the artist.

13) By participating to this event you accept to be photographed and filmed.

14) This sales link is strictly reserved for people on the private guest list of the organiser. In case a non private guest purchases on this link, the purchase will be considered as a fraud, they won’t be allowed access to the event *and won’t be refunded

15) WARNING-EXCESSIVE EXPOSURE TO LOUD MUSIC MAY BE DAMAGING TO YOUR HEARING.