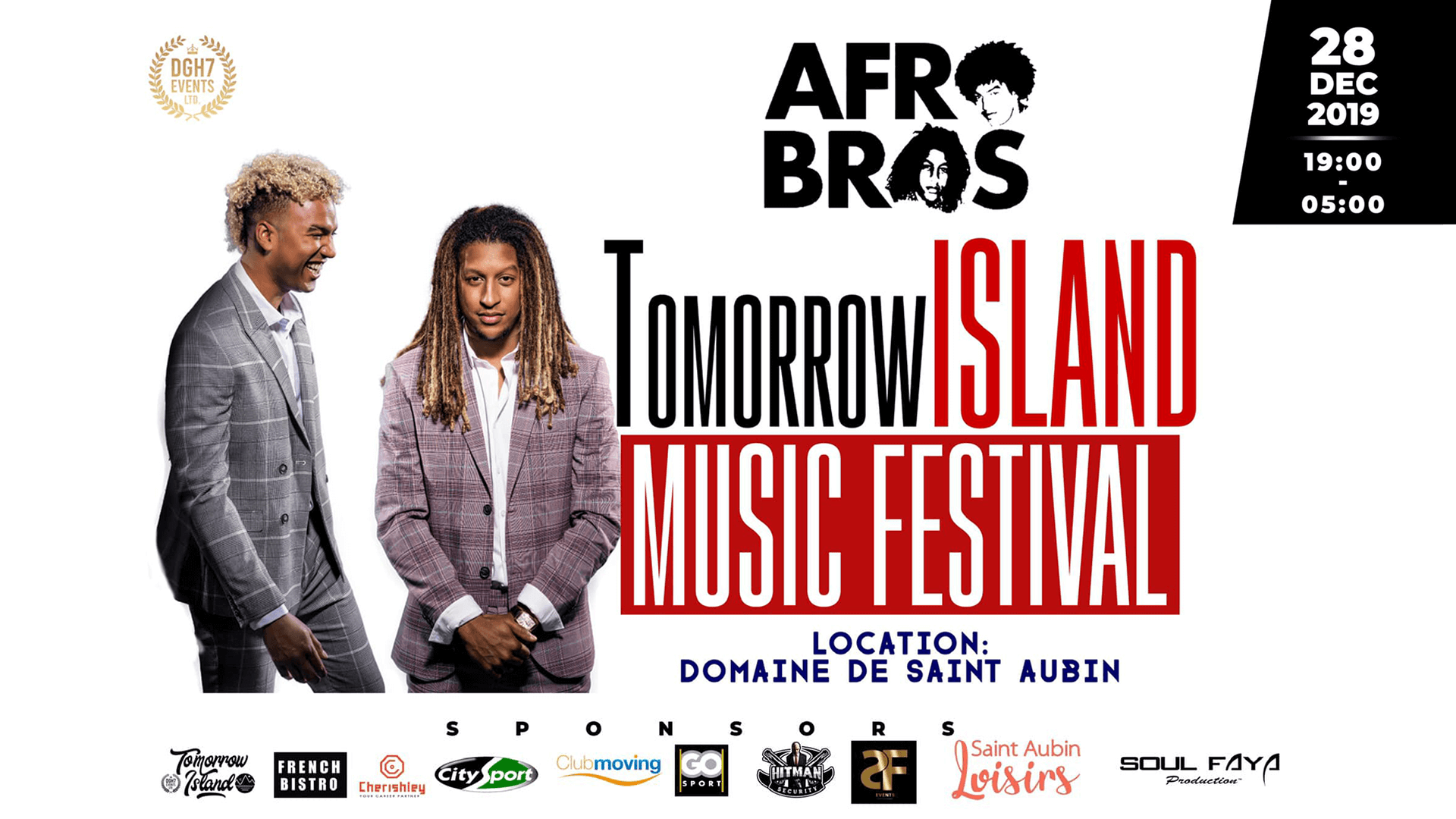 After the immense success of the first edition, we are now announcing the second one. Get ready for a party like no other ever before in Mauritius. We have already raised the bar drastically, now we are raising it even higher.
We are proud to announce the headliner of TomorrowISLAND 2nd Edition, the one and only Afro Bros !

Giordano Ashruf & Rashid Badloe, better known as the “Afro Bros”, are a dj-duo based in Arnhem, The Netherlands. They are signed to Spinnin’ Records.
They are family related and both grew up in a very musical family. They both started working as promoters for electronic dance parties in their hometown Arnhem. After a little while they started thinking: “why aren’t we standing in the DJ booth?”.

From that moment on they started developing a fanbase with their unique uplifting sounds and beats that they played throughout the whole country. They set goals and made all those come true in a very short time. It wasn’t long before they were playing in all the clubs and big festivals within The Netherlands.

After 5 years of performing all over the world, they decided to do something different. In 2016 they released a Dutch track “18+” that also got a Spanish version. The Spanish version has almost got 2 million streams on Spotify.
After the release of that track, the Afro Bros only got bigger and better. They are on a hit streak and are hoping to continue their streak. With their original sounds, unique drums and 10 years of experience, these guys, two young men, are ready to take over the world with Latin beats and uplifting vibes.

You may know them from hits like: Energie (with Ronnie Flex & Frenna), Sua Cara (with Major Lazer), Come Again (with Boef & Ronnie Flex), X (with J Balvin & Nicky Jam), Kijken Mag (with dutch YouTube channel “Supergaande”) and many more to come! With their most recent release “So Much Love”, together with Charly Black and Stevie Appleton, they want to establish a new movement and conquer the world with their music. With “X” hitting 160 million views on YouTube within 2 weeks it’s heading to the fact that 2018 will be the year for the Afro Bros. In 2018 they already released 1 EP and 4 tracks and there is so much more to come!

Afro Bros is bringing out various music styles and genres like: Latin House, Afro House, Moombahton, House and Urban. With that combination, a whole new world opened up for the Afro Bros.They made their first track called “Dubbelfris” that started their original sound. Soon after they started getting gigs throughout the whole country, their career started to get to a new level.

ZOYA (Bulgaria)
Singer-Songwriter, Trance and EDM vocalist plus DJ and ZOYA is a singer-songwriter,producer,DJ and a social media influencer. Since an early age she has had a profound interest in music which would lead to studies in opera and piano at the Music academy in her hometown Plovdiv. ZOYA would then leave her home country of Bulgaria to embark on a bohemian lifestyle of music, work and travel. Living and working in different countries she was constantly learning, gaining experience and collecting new inspiration to incorporate into her style of song writing. In 2013 she fell in love with electronic music and knew from then on that it was in this genre that she wanted to make her impression. During the ADE she presented 2 songs and her voice was first announced to a worldwide audience. The collaboration requests started to rain in and her first project “ Oceans Away” was signed by Armada music. Currently ZOYA is working hard writing and producing for herself and other artists. Her main love will always be trance but having an eclectic taste in music herself she is always open to experiment in other music genres.

5) This ticket is a revocable license and the management reserves the right, without the refund of any portion of the ticket purchase price, to refuse admission or to eject any person who fails to comply with the rules of the venue and applicable laws.

9) This ticket may not be used for advertising, promotion or other trade purposes without the express written consent of the management.

10) The ticket user consents to use of his/her image or likeness incidental to any video display, transmission or recording of the event by the management or the venue.

11) The use of cameras, video or audio recording equipment is prohibited unless otherwise indicated by the management.

12) By participating to this event you accept to be photographed and filmed.